The hybrid or cross-platform app development companies provide easy way out by delivering an app that runs on iOS and android platform both with reasonably satisfactory functionality to fulfill objectives of business. Flutter app developers are another addition to the list of options businesses now have to get cost-effective app for their ventures.

Ever since flutter came into market people have started using it to develop apps that fit in the budget range of majority of clients, although other platforms like React Native are still more popular and more apps are being developed in these compared to flutter. So if you are planning to get an app developed in flutter and not through any iphone app development company you should consider following crucial points before making a decision.

Flutter uses Dart – an object oriented programming language, and comes with rich widgets along with facility to create custom widgets. The UI is easy to develop and handle and provides great look and feel. The hot reload makes developing the app and designing easy and much faster. Developer or designer can make changes in the code and see them straight away without a restart. This facility reduces development time considerably as compared to iOS development and provides more cost-effective app development.

However the libraries and support of flutter is rich but it needs more development to fulfill requirements of native development. If you need complex and bigger app the developers may need to develop certain functions on their own that can demand more time. The development cost and time increases with complexity of apps.

Flutter app development dishes out applications that run faster. There are technical reasons why flutter delivers faster apps in which you can scroll down without cutting or breaking. When apps are developed in flutter for iOS the look, feel and speed matches native apps and give user similar experience.

Even if you are using an older model of iPhone or iPad, flutter apps work perfectly and as good as these work on latest models. This is one advantage which weighs heavier in favor of flutter development as iphone apps may not function properly on older models. Apple’s strict policy to urge users to keep switching to newer models and OS makes many newly developed apps incompatible. With flutter app development companies can be sure that all types of users whether using an older model or latest are able to access their app.

One code for two platforms

You can use one code for both iOS and android platforms. If you get an app developed specifically for iphone users and in future need its android-version as well, flutter app developers can float android version of app in no time. This saves valuable time and money that gets spent in native iOS app development and then one more time for Android app development.

Flutter is out of nascent stage?

As said earlier here flutter is making enviable progress in popularity right from the moment of its launch. It was launched in 2015 but recently the sudden rise in its popularity has brought it in top 30 SDKs used for developing apps. Many experts dedicate the popularity of flutter to growing popularity of other hybrid or cross-platform technologies. It is also an open-source which means development cost is much lesser than other established technologies.

After mentioning all this it is important to understand flip-side of the story. Flutter needs more additions to mature as complete cross-platform mobile SDK. The whole idea of flutter revolves around widgets. It comes with its own widgets and does not use OEM widgets. These widgets look like native to iOS apps Cupertino. The UI is designed by using widgets for buttons, menus, fonts, styling etc. and it also provides facility to create custom widgets.

If your app needs to communicate with other devices via Bluetooth flutter development can cost more time and money and even after that you may not get as smooth functionality as native apps provide. Flutter app developers need to develop this feature separately and then add to main flutter app. If your app demands any rare or native functionality developers may need to burn more oil to get this feature accommodated in flutter app, as flutter library still needs some serious enhancements. To solve such problems developers are pushed to go around the problem to find a solution.

Flutter no doubt may prove as technology for future but right now it is great for making lighter apps or MVPs. It is certainly getting up to give some serious competition to React Native and other cross-platform technologies. If you need complex app for iphones right now it would be advisable to go for native development or choose other hybrid technologies. But if you need fast mobile app development and attractive powerful UI and not any critically important rare or complex functionality you can safely choose Flutter. Now Flutter 1.7 is already available with latest enhancements and solutions for many initial obstacles. 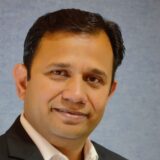 Suvigya Saxena is the Founder & CEO of Exato Software, a global ranking web and mobile app development company. With 15+ years of experience of IT Tech which are now global leaders with creative solutions, he is differentiated by out-of-the-box IT solutions throughout the domain.

1 reply on “What type of iOS app you can make using Flutter?”